Year 4 at Torriano Primary School have been honing their oracy skills while taking part in the OneLess campaign run by London Zoo. The question at stake was: ‘Should governments ban all plastic?’ We used several techniques presented at the launch day of the Camden Oracy Hub on 31st October.

We began with group discussions, using thumb’s in as a protocol so the children knew what to say. We had sentence starters on the table, alongside the ‘Builder’ and ‘Challenger’ cards. ‘Talk Detectives’ listened in a round the room, looking for specific oracy skills and reporting back to the class when they were heard.

After that, we organised the children into a ‘fishbowl’ grouping, where a small group of children sit in the centre having the discussion (the ‘fish’), while the rest of the class looks on. All of the observers were talk detectives with clipboards, picking up on the 4 strands of oracy that they heard during the discussion. The children were very focussed and their group discussion skills are really developing – even if the main bone of contention became about whether lego would still fit together if it was not made of plastic! 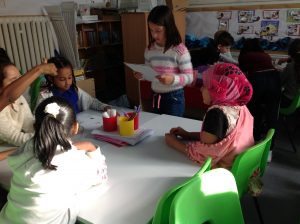